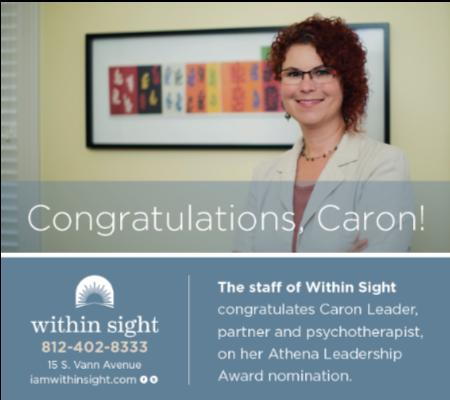 Caron J. Leader, Partner, and Psychotherapist at Within Sight is one of 10 nominees selected for this year’s award. The celebration takes place this week with a luncheon and then the announcement of the award winner. The women selected makeup community activists, volunteers, businesswomen, doctors, entrepreneurs, and counselors. A committee of community and business leaders selects the finalists after being nominated by a peer. Selected for their work in community service and mentoring, all the women nominated exemplify what the ATHENA award stands for. Caron is following her mother’s example. Her mother, Donna Leader won the Athena Award in 2004.

The following information about Caron was submitted by Tammy Schaefer for Caron’s nomination packet. It details her experience and focus on volunteering, community service, mentoring, and business development.

Caron provides supervision to Licensed Social Workers for two years as they work toward their clinical licensure. She provides this service at a reduced or pro bono rate for those just graduating from school and/or if they work for a not-for-profit and do not have a supervisor. Social workers have to do a certain amount of face-to-face clinical hours and then meet with a licensed professional weekly for two years as they learn how to apply their studies to the practical clinical environment.

Caron and her partner have a unique business model that is focused on helping staff members grow and develop. She developed her business with self-care and good clinical support as the basis of how she would treat staff members and in turn, she feels this provides a successful clinical experience for clients. What a great way to mentor others while showing them how to run a successful business! Caron also provides professional development for her staff members and all clinical staff must be involved in the marketing and networking of their practices. She asks all staff members to participate in volunteer activities and she has a goal of creating a pro bono program for the community next year.

BUSINESS ACCOMPLISHMENTS:
Caron played a key role in growing an already stable psychotherapy firm, aha!, to the next level by increasing the firm’s brand, visibility, and market share in Evansville. In addition to clinical work, she developed their website, assisted in automating the billing and scheduling system, and transitioned two partners into the firm.

In 2013, Caron and her partner, Julie Bellamy, opened Within Sight. This was a complete start-up business so they created everything from business & marketing plans to the office and clinical space design. In addition to financial and clinical operations, Caron handles their marketing, networking, and social media. She also shares the responsibilities of a staff of seven.

Caron also helped her husband, Mike Boren, start his business and has continued to assist him as much as possible since he started The Guitar Lab in 2003. This year Mike re-branded his business as Evansville Music Academy and Caron helped him throughout the process. Over the course of the last ten years, Caron has helped Mike by expanding, buying a building and remodeling it, designing marketing materials, and well just about anything else that he needed. She has been a chief bottle washer for both businesses and is not afraid of hard work!

COMMUNITY SERVICE :
Caron developed a program on burnout and compassion fatigue that Within Sight provides free of charge to social service and not-for-profit agencies. She has the agency’s staff come to Within Sight and then treats them to conversation, group activities, and good food, which the agency can use for professional development and/or self-care. She has hosted Albion Fellows Bacon Center, Youth First, Inc. and has also done the program off-site as well. In addition, she plans to work with the Evansville Parenting Time Center this fall.

Caron also provides presentations and in-services on mental health topics to not-for-profits agencies pro bono or a reduced cost. She has presented many times at the University of Southern Indiana Social Work Conference, Crisis Intervention Training for Emergency Service Personnel, and the Evansville Psychiatric Children’s Center to name a few.

During Caron’s time on the ANEW Board, she created a process to formalize all policies. I was serving on the Board at that time and have first-hand knowledge of the amount of time and effort she devoted to this project. It was much needed and has helped all future board members stay consistent and true to policies that were put in place to help ANEW be a stronger organization. Caron spearheaded the project to develop ANEW’s first logo and marketing materials. In addition, Caron worked on researching and formalizing ANEW’S history. After serving as President, Caron continued to serve as a Director and developed the first Orientation committee for new and existing members to become familiar with the organization.

One of Caron’s passions is bike riding. Caron and her husband started a cycling racing team, Team Guitar Lab, in 2009. Their mission was to create an Evansville-based, registered USA cycling team that would support, educate and encourage the sport of cycling in junior, adult, and master racing categories. In 2011, they brought racing back to Evansville for the first time since the 80s with the River City Bicycle Classic. They have had great success, bringing in over 700 racers to Evansville and raising $13,000 for the Boys and Girls Club! This effort takes a lot of work from December to June. They have a very small committee of only five people who make it happen.

In addition, Caron has volunteered and served for the following:

– University of Southern Indiana Social Work Advisory Board, Board Member 2010-2012

ADDITIONAL INFORMATION PERTAINING TO CRITERIA:
Caron is not only honest and trustworthy, but she inspires trust in those around her. If Caron makes a commitment, there is never a doubt that she will follow through and do so in an ethical manner. Caron is a true professional and interacts well with everyone because she strives to understand people and their situations without judging.

Caron has accomplished a lot at a very young age. That in itself is very inspiring. Caron is always focused on the person and developing a relationship and everyone in her networks knows that she cares. Caron strives to help others be successful and is quick to allow someone else to shine.

For more information on the ATHENA luncheon, the other nominees and the ATHENA International organization use these links: